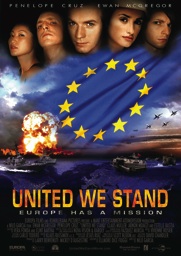 
"United We Stand. Europe has a mission" is the punchy title of the non-existent, fully EU-produced Hollywood-style blockbuster: "A brilliant mix of espionage and sci-fi political stereotypes in which Europe, not the USA, saves the world from impending doom". The project that consists in the invention and promotion of this nonexistent movie is hitting public and media space all over the world through city-scale urban installations and viral communication tactics.

Since December 10th, Postmasters Gallery in New York has been the first of a series of art venues to host the disclosed side of the United We Stand project. The exhibition will run parallel to the ongoing communication strategy. "We are working simultaneously on this double track, the "fictional" and the "real" - explains Franco Mattes - in this sense, spectators in the gallery who are aware of the multiple layers are passive voyeurs, while the unaware "spectator", or passerby, is actually part of the artwork".

Eva and Franco Mattes - internationally known as 0100101110101101.ORG - are a couple of restless European con-artists who use non-conventional communication tactics to obtain the largest visibility with the minimum effort. Past works include inventing and promoting a nonexistent artist; spreading a computer virus as a work of art; challenging and defeating Nike Corporation in a legal battle for a fake advertising campaign.